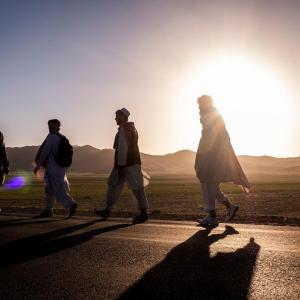 The Afghan Peace Talks on the Eve of Their Presidential Election

Mullah Khairullah Khaikhwah, a senior member of the Taliban, stated that a peace deal between the US and the Taliban negotiators would likely end in an awaited peace deal by the end of this week. After eight peace talks in Moscow, Qatar, Pakistan, Indonesia, and Afghanistan, a hope for a permanent ceasefire appears elusive. Afghan political parties, including Jamiat Islami, are optimistic and supportive of a peace agreement. The Afghan government is skeptical and does not accept any agreement but the resolution to hold fair and free elections.

According to a senior Afghan official, intra-Afghan dialogues are agreeable on three main issues:

Ashraf Ghani’s running mate, Amrullah Saleh, calls the political leaders behind this agreement, “useful idiots/self-named leaders…” on his Twitter and states that “…elections will take place. Allow no poisonous propaganda to disturb your patriotism. The link between elections and peace process is very direct & crucial. No one without a mandate from the people can negotiate a settlement.”

The Bonn Agreement of 2001 created a timeline for presidential and parliamentary elections to commence in 2004.  The United States backed the successful presidential campaign of Hamid Karzai, but parliamentary elections were not successfully held until September 2005. Elections at this level were hampered by accusations of electoral discrepancies and voter fraud. It is speculated that these two factors tarnished the elections as illegitimate and accordingly led to a low voter turnout.

In August 2009, presidential and local elections were held. Accusations of fraud, such as ballot stuffing, emerged yet again. A low turnout and acts of intimidation presented challenges. Months later, in October, the US pressured Afghan President Karzai to authorize a runoff vote to rectify complaints of the original election. Karzai ran against Abdullah Abdullah; the latter dropped out of the race due to a lack of transparency. Thus, Karzai remained president for the next five years, as the country vowed to overcome any future fraud and corruption through the implementation of a better electoral system.

Parliamentary elections in 2010 did not differ much. Twenty-one candidates were disqualified by the Independent Election Commission because of fraud and illegal activities. Further, the Taliban used terrorist attacks and threats to incite voter suppression. These particular acts of fear-mongering dissuaded women and progressive candidates from becoming elected.

The 2014 elections marked Karzai’s term limits and a new president would be elected to office. Ashraf Ghani won against Abdullah Abdullah, but charges of fraud remained.

The Electoral Commission postponed the 2019 elections twice in efforts to curb fraud. As a consequence, the presidential elections are slated to take place on September 28, 2019.

Voter suppression and intimidation remain typical obstacles of elections in Afghanistan. It is a nationwide problem as the Taliban and other terrorist groups target civilians in major cities like Kabul and in remote countryside villages.

The US, Afghan representatives, and the Taliban concluded the Doha peace talks, but it seems that no agreement has been reached, especially regarding election processes. It is the Taliban that seems to be the unwilling actor as they continually refuse to speak with the Ghani regime; authorities they deem illegitimate. In the post-peace talk period, the Taliban continue to engage in acts that strike fear in ordinary Afghan civilians.

The US, UN, and the Afghan government state their commitment to ensuring that the Independent Election Commission can thwart voter suppression and election fraud. Nevertheless, the commission is faced with managing the troubling union of terrorism and corruption.

Terrorism and corruption go hand in hand and play off each other. They create instability in government systems, which in turn create anxiety within the people, who are left to consider their electoral system as illegitimate. Elections are not perceived as free and fair.

Here is a breakdown of what peace talks mean to each side and what needs to be done.

Interests of all peace brokers matter. The Trump administration wants to end the Afghan War and fulfill perennial campaign promises ahead of the 2020 elections. President Trump would tactically boast of such a major achievement. Since 2001, the US has used hard power methods to create stability and to end terrorism. Trump stood firm in the early years of his presidency as he used additional options for delivering strong military strikes in Afghanistan. He increased the number of troops on the ground from 10,000 to 14,000, dropped the ‘mother of all bombs’ on ISIL headquarters and suspended military aid to Pakistan.

The US has since amended its stance in favor of diplomatic measures and seeks to give the peace process a chance. Trump-appointed Zalmay Khalilzad as the Special Envoy for Afghanistan Peace and Reconciliation to take the lead on all US efforts. Recently, there has been an excellent amount of progress, mainly the Taliban’s willingness to discuss their grievances and explain how they want their country to be operated.

A negotiated settlement is in the best interest of opposition political parties for numerous reasons. First, President Ashraf Ghani has ruled Afghanistan with an iron fist, from centralizing power and isolating powerful political leaders like Rashid Dostum and Ata Mohammad Noor.

Abdul Rashid Dostum a.k.a General Dostum — the leader of the National Islamic Movement of Afghanistan or simply known as Junbush and the current vice president — was exiled under the direction of President Ghani. Dostum’s role in the Afghan government is viewed as symbolic since he was used twice by both Ghani and Karzai to tactically augment their coalition of supporters. He represents Uzbeks; one of the four major ethnic groups in Afghanistan. Nevertheless, Dostum’s relationship with the Afghan political elite has been complicated as both administrations exiled him to Turkey for numerous reasons. These include rape, torture of a local commander and being powerful enough to initiate a revolt.

Ghani lost an influential leader, Ata Mohammad Noor; the Chief Executive of Jamiat-e Islami Afghanistan and a governor with thirteen years experience. According to our research, an announcement from the Afghan government office, and an exclusive interview with TOLOnews, it was revealed that Noor resigned over a condition-based agreement a year prior to the actual acceptance date of his resignation. His resignation was accepted by Ghani without the acceptance or approval of any of the stated conditions. As president, Ghani had the constitutional right to replace him or anyone else, but this aggressive action was viewed as an “ethno-nationalist” move and faced with nationwide criticism, including the famous Afghan commander, General Raziq, who later was assassinated by the Taliban.

Bad decisions such as these further damaged the integrity of the government and created mistrust between political actors. In Afghanistan, political leaders from different ethnicities are influential, powerful and necessary for cooperation to combat terrorism and build a democratic Afghanistan. Ghani’s decision to simply dismiss two influential leaders of two major political parties jeopardized his regime and ill-effects of these actions are felt to this day.

The Ghani administration wants to continue its rule and does not want to relinquish power. They understand well that if the US and the Taliban accept an interim government with the support and agreement of political leaders, their regime will end. Further, they do not have the political capital to win an interim government leadership position, nor will the Taliban and other Afghan leaders will allow them to gain power in such a framework.

This is the chief reason why the Afghan government is skeptical of the peace process and an interim government. The election provides an avenue for Ghani to retain power and he wants a legacy like his predecessor Hamid Karzai; to rule for a long time to implement his policies as he continuously promises the people.

Both Ashraf Ghani and his running mate, Amrullah Saleh are in favor of elections mainly for the above reasoning. In a recent TOLOnews exclusive interview with running mate Amrullah Saleh, Saleh’s definition of peace requires the Taliban compete in an election so that they can express their policies if they are capable of such politicking. Saleh criticizes the Taliban for not having basic literature and accuses them of being a “puppet” to Pakistan.

The Taliban wants to make peace with the US because they are the root of the current Afghan government. Without US intervention, contemporary interpretation of the Afghan government or democracy would be alien. The Taliban occupied approximately 90 percent of Afghanistan by 2000 and could have stayed in power had they not been toppled.

Over the past 18 years, the Taliban continuously fought and outlasted sophisticated military operations under the guidance of two US presidents (George W. Bush and Barack Obama), NATO and ISAF forces. These struggles compelled the US to negotiate with the Taliban.

The Taliban view Afghanistan’s president as a “puppet of the West” in the same vein that the Afghan government considers the Taliban as a “puppet” of Pakistan. They have stated on multiple occasions that they would negotiate with past enemies — Mujahidin rather than the current “non-Islamic” government of Afghanistan. This stance remained unchanged since the former president Hamid Karzai called the Taliban in 2006 to join a peace process or the first time.

The Taliban gained a worldwide reputation after the US government appointed Khalilzad as the special envoy. They perceived this as a recognition of their status as a political party rather than an insurgent group. The US’ soft approach provided the Taliban with additional power to reject the Afghan government as illegitimate, as they always claimed over the past 18 years. They saw this as an opportunity to deal with the master and real ruler behind the scenes — the United States.

The Taliban are a major insurgency group that has operated in Afghanistan since 1996. Since that time, they have harbored Al-Qaeda, the Haqqani Network, the Islamic Movement of Uzbekistan as well as numerous foreign fighters from diverse parts of the world. Insurgents primarily from Pakistan, Saudi Arabia, Tajikistan and the Russian republic of Chechnya traveled to Afghanistan for Taliban instruction and education.

If a negotiated settlement is reached, the likelihood that factions of the Taliban, along with over two dozen other terrorist groups operating in Afghanistan, will continue to be obstacles to the peace process. One particular organization, the Islamic State of Iraq and the Levant, have a foothold in the Khorasan province of Afghanistan, Pakistan and infiltrating Central Asia.

History reveals that elections in Afghanistan struggle with illegitimacy and corruption. The 2019 edition appears to be stymied by similar complaints despite efforts of the US and Afghan governments to ensure free and fair elections.

The Taliban and opposition parties consider this round of presidential elections as fraudulent due to corruption inherent in the current Afghan government. Since the Taliban have additional motives and do not want elections to be held, the integrity of the electoral process is used as a factor in the peace talks.

A peace deal will come with a big cost — dismissal of elections and creation of an interim government, or the “New Government,” as labeled by the Taliban.

If all parties truly want peace, they must appreciate the United States efforts in brokering this deal. To this date, the current Afghan government has been skeptical of the peace talks mainly to remain in power and win another mandate to govern through elections. Gaining power is the most important aspect of some political actors and rejection of a peace offer from the Taliban insurgency is demonstrative of their stance on peace and democracy.