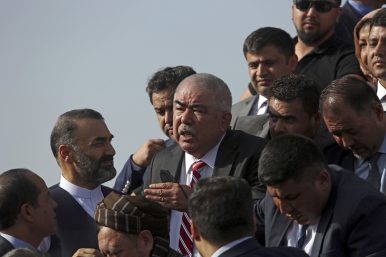 Originally published at The Diplomat Magazine

The vice president of Afghanistan, General Abdul Rashid Dostum, returned to Afghanistan on Sunday after self-imposed exile in Turkey amid allegations of rape, sexual abuse, and torture.

In December 2016, Ahmad Eschi, former governor of Jawzian, brought charges that he was detained, tortured, and sexually assaulted by Dostum and his guards. The Afghan Supreme Court ordered Dostum’s house arrest for these charges and the vice president fled to Turkey.

Dostum, a part of the Northern Alliance that toppled the Taliban in 2001, is known for his strong militia and Taliban killings. Yet his homecoming is a complex and controversial event.

The government, unable to control the situation, is seemingly looking to Dostum to impact these protests and settle matters down. There is speculation that this is the purpose for his return. But if one looks further, thereare other reasons for his return at this time.

When in Turkey, Dostum formed strong coalitions with General Atta Mohammad Noor, former governor of Balkh province, and Mohammad Mohaqiq, second deputy of Chief Executive Officer Abdullah Abdullah. Noor in particular is known to persuade by pressuring the government to meet his conditions.

In the presidential election of 2014, Abdullah Abdullah, now the chief executive officer, and Ashraf Ghani, the current president of Afghanistan, almost sparked a bloody civil war with their feuding. Former U.S. Secretary of State John Kerry was able to circumvent this, but at great cost. Since the development of the National Unity Government (NUG), an uneasy alliance between Abdullah and Ghani, Afghanistan has become more fragile and violent, with a lack of leadership and centralized power by Ghani.

Rather than one president, two disagreeing leaders are ruling Afghanistan, leaving everyone vulnerable to their internal disputes. To cite just one example, Minister of Energy and Water Ali Ahmad Osmani was fired by Ghani this past June but was brought back by Abdullah — only to be run out of office by the president’s secret service.

The underlying problem in Afghanistan is longstanding ethnic conflict and fears. Throughout history, Pashtuns predominantly ruled the nation and considered themselves the dominant ethnic group — but were not the majority of the population. Other ethnic groups, such as the Tajiks, struggled to gain power, control, and domination in a quest to have one of their own as president.

Each group acts as if they will bring peace to Afghanistan, but each group wants the presidency for the purpose of power, inciting hatred between the political parties and civilians. Rampant discrimination and racism have made peace impossible, resulting in four decades of war. The ethnic conflicts with ties to the civil war are the root of what has made peace impossible for the past 40 years.

These various factions have turned Afghanistan into a battleground for power and not for the people. The technocrats, warlords, and Taliban all state their intent to bring peace – but no group is willing to establish policies that include compromise and inclusion.

The warlords — leaders like Dostum and Noor — comprise a major part of the nation. They are both loved and hated by the people because of their victory against the Soviet Union and the destruction this civil war resulted in. They fought the Taliban from 1996 to 2001, resulting in deep hate for each other.

The technocrats – represented by Ghani’s government — are blamed for dictating power and supporting programs and policies that benefit predominantly Pashtuns. They resist any other group that wants government representation, leaving a deep mistrust. They are also regarded by many as “puppets of the West.”

Finally, the Taliban are viewed as an extreme group but many Pashtuns welcome and praise them because of the stated possibility of peace, shared ethnicity, and a unified Afghanistan they envision through Taliban leadership. The majority of the population, however, view the Taliban as “the puppets of Pakistan” and believe them to be aligned with other extreme nations who engage in terrorist acts without regard for innocent people, destroying economies and civilizations with their mandates such as prohibiting education for girls.

Amid these battling forces, peace in Afghanistan is not a simple matter. It will require education and a willingness to accept others for the purpose of unity. Peace will only be attained when there is equal and shared power, with representation from all ethnicities, and when the Afghan people develop trust and learn to embrace each other for unity, tolerance, and peace as a shared interest for the common good.