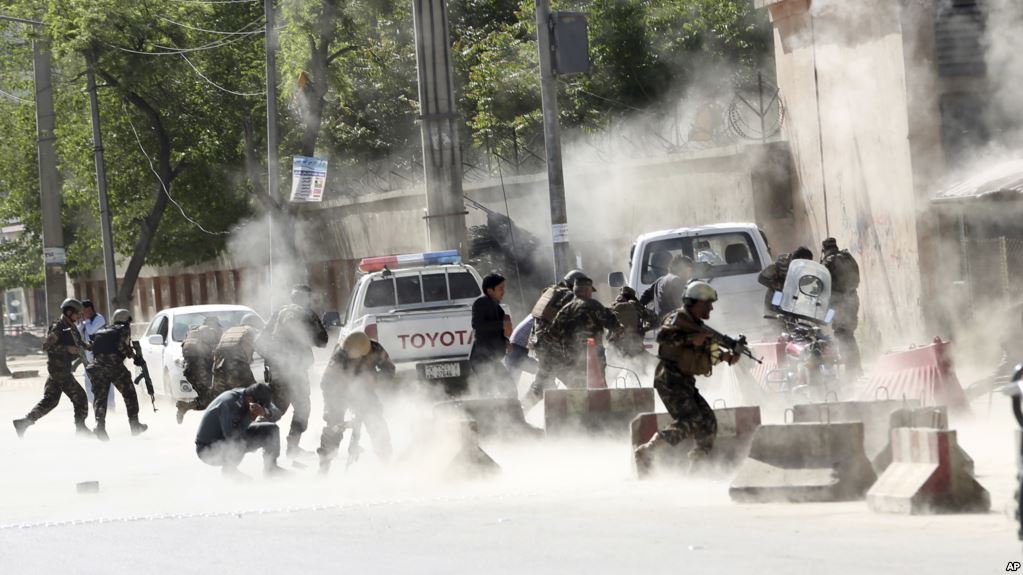 Today marks the 40-year anniversary of the Afghan civil war. A country at war for four decades, Afghans continue to have faith that peace is possible.

The people are tenaciously hopeful, but for how long, given the unstable environment and competing for socio-political agendas? Terrorism continues to rise, and the democratic process is under fire. Just last week, more than 60 men, women, and children in Kabul and Baghlan province were killed in the voters’ registration attack. The following chronological framework of the Afghan Civil War may provide some perspective into this complex country turmoil and its psyche.

Outside the presidential palace gate (Arg) in Kabul, the day after the Saur revolution on 28 April 1978

In 1978, The People’s Democratic Party, a political party in Afghanistan backed by the Soviet Union, attacked the presidential palace. The party killed the first president of Afghanistan, Sardar Mohammad Daoud Khan, and his entire family. Then, the Party took the throne. The People’s Democratic Party would remain in power for 14 years while fighting the U.S.-backed Afghan Mujahideen, a rebel group of freedom fighters that stood against the communist regime.

Soviet Army soldiers wave their hands as their last detachment crosses a bridge on the border between Afghanistan and Soviet Uzbekistan, Feb. 15, 1989.

In 1992, although the Mujahideen declared victory, a devastating civil war followed. From 1992-1996, Afghanistan experienced one of the most destructive civil wars in its history. Afghans often refer to it as the “Bloody War”. The Afghan Mujahideen did not compromise on a shared power by a unified government. Instead, fought for the throne, and like Syria resulted in a devastated Afghanistan. The most perilous party was the Hezbi Islami, meaning Islamic Party, led by Gulbuddin Hekmatyar, also known as the “Butcher of Kabul”. Hekmatyar’s missiles killed thousands of innocent residents of Kabul. According to the Human Rights Watch, by the year 2000, roughly 1.5 million people died as a direct result of the conflict, and some 2 million people became permanently disabled.

In 1996, as the Mujahideen fought for power, the Taliban (“students” in Arabic) emerged in Pakistan. Backed by the Saudis and Pakistan, the Taliban seized Kabul in 1996. They introduced an extreme version of Islam, banning women from studying and working, and inflicting severe Islamic punishments upon the citizens, such as stoning people to death, public beheadings and amputations.

Taliban militiamen drive toward the front line near Kabul in November 1997. (Reuters)

Afghans were struggling for deliverance when on September 11, 2001, Al-Qaeda brought down the World Trade Center in an attack that killed more than 3,000 innocent Americans. That was the year that the United States declared a War on Terror and entered Afghanistan. Since then, the U.S. has remained, combating terrorism to build democracy and help bring more peace to the country. Despite the U.S.’ long tenure in Afghanistan, the same challenges exist.

Gulbuddin Hekmatyar’s bombardment of Kabul during the 1990s inflicted some of the worst damage in more than 40 years of war, destroying one-third of the city and killing tens of thousands of civilians.

Afghanistan is not an easy fix. Afghans are ready for a democratic change in order to bring more peace to their homeland, but establishing democracy requires time. The question remains as to whether the government is ready to hold a transparent election because Afghans are so tired of war. In fact, most Afghans are willing to give up almost everything, including many civil liberties, in exchange for a semblance of peace in their homeland. It is hopeful that, despite the failures of the government, Afghans, and particularly the young generation, the generation of war, will be able to make some traction.

Through higher education, new opportunities will present themselves to these young men and women. Armed with a level of understanding and the kind of knowledge aimed at progress over destruction, this generation will be the agents of change.

Ahmad Shah Mohibi is founder and president of Rise to Peace, and a national security expert. Ahmad Mohibi is a published writer, as well as a George Washington University and George Mason University Alumni. Follow him on Twitter at @ahmadsmohibi